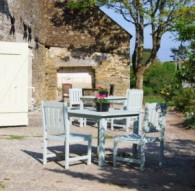 Sometime you just know…. and we knew the moment we drove into the yard here on our first viewing, before we even go out of the car, the magic that is Trenderway enchanted us and we were caught. Whatever the season, the weather or the mood, Trenderway grabs its visitors and leaves subtle happy footprints in their memories.

Historic documents show that Trenderway was part of the Trelawney estate until the first decade of the 20th century before being sold. It was then farmed by different parts of two families until 2008 when we moved here and took over from Anthony and Lynne, not knowing quite what this sort of escape to the country actually meant.

At one time a large cattle, pig and sheep farm, when we came here Anthony was farming sheep and Lynne was running a successful 5 star B&B.

We took over the running of the farm and while consolidating the B&B, within a few months had started our pedigree herd of South Devon Cattle, closely followed by the heritage apple orchard.

When we first looked in the old granite barn opposite the farmhouse, all we could see were the massive grain silos, long redundant and unusable. A winter project to slowly dismantle them revealed this amazing space, with rooms and doorways that we had not known existed before!

Careful and painstaking restoration work followed – with Yaron driving the carpenters mad insisting on traditional methods (take a look at the floors when you visit) and by 2012 we welcomed the lovely Helen and Ciaran as our first couple.

There are no reviews

Search Directory
All You Can Eat
Arrive In Style
Captured Moments
Design & Decorate
Dress To Impress
Freshly Cut
Health & Beauty
Party Time
Plan Ahead
Stags & Hens
Wedding Gifts
Wedding Venues
Follows Us On
Advertise With Us
Register for free listing
Sign in
Latest News
Dec 30.12.2019
1. Walk Down Memory Lane Make the guest feel like integral parts of the day by incorporating them into the dÃ©cor â in a galler...
Read More

Dec 26.12.2019
Itâs easier than you think to save money on your big day. Hereâs the first part with those easy peasy ways to keep to your bud...
Read More
Read all Latest News
Newsletter
Terms & Policies